Git out yer’ chainsaws and yer’ shot guns!  Just in case you haven’t noted from your “regularly broadcast television shows” shotguns gots’ a nice “spread.”  Cain’t miss em’.  Dey’ got’s a nice spread!  (FYI, in order to get the right feel for those last few sentences, you have to read them with the best “back woods, I got a bunker up in the heels’ where I keeps ma’ beans and ma’ moonshine” accent.)

There’s been a recent spike in obsession about zombies.  I use the word “obsession” on purpose, because “interest” and “curiosity” don’t quite capture the strength of our fascination with the topic.  I just read an article titled, “Are There Too Many Zombie Related Television Shows to Watch?”  I had no idea how many Zombie shows were out there!  Of course, there’s “The Walking Dead,” but then there’s also “Z Nation, The Returned, Resurrection, In the Flesh, Fear the Walking Dead, Empire of the Dead” and finally, “iZombie.”   Really, “iZombie?”  It sounds like an Apple accessory.  Only this could be an accessory… to murder.

The CDC added fuel to the obsession flame when it decided to educate Americans on how to prepare for the zombie apocalypse.  No, that is not a joke.  The CDC tries to help people get prepared for potential emergency situations.  They updated their site to include preparations for Zombies taking over the world.  Their posters read “Get a kit.  Make a plan.  Be prepared.”  This was a tongue-in-cheek campaign to engage new audiences, which worked a little too well.  I kid you not, I’ve actually met a person who kept a zombie apocalypse kit with her when she left the house, you know, just in case.

Study after study indicates that people take a keener interest in God the older they get.  The closer to death, the greater the interest because they can no longer ignore the inevitable.  It’s also fair to note that many people who take an interest in God later in life regret not seeking God more passionately early in life.  We all know that death is coming, but are we prepared for what we’re expecting- to come face to face with the one who created us with a purpose in mind?

I don’t imagine that any of us have a Zombie kit at home or have a bunker in the woods.  Chances are, we won’t need them, but I pray that we prepare adequately for the day we leave this earth because that day is coming.  Until then, may we surround ourselves with people who challenge us about the character of God.  May we read the words of people who have sought after Him and allow our hearts to be inspired by God to love His people.  May we prepare to see God face-to-face. 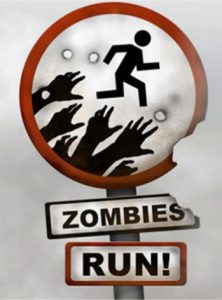